Abstract : Introduction of the New Silk Road Initiative and the Chinese silk road

Originating at Xi'an (Sian), the 4,000-mile (6,400-km) road, actually a caravantract, followed the Great Wall of China to the northwest, bypassed the Takla Makan Desert, climbed the Pamirs (mountains), crossed Afghanistan, and went on to the Levant; from there the merchandise was shipped across theMediterranean Sea. Few persons traveled the entire route, and goods were handled in a staggered progression by middlemen. 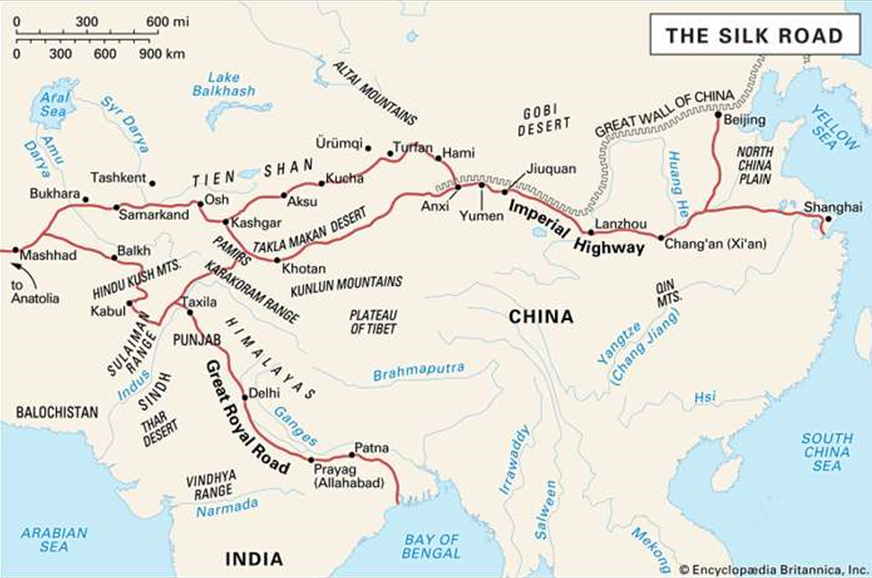 With the gradual loss of Roman territory in Asia and the rise of Arabian power in the Levant, the Silk Road became increasingly unsafe and untraveled. In the 13th and 14th centuries the route was revived under the Mongols, and at that time the Venetian Marco Polo used it to travel to Cathay (China). It is now widely thought that the route was one of the main ways that plague bacteria responsible for the Black Death pandemic in Europe in the mid-14th century moved westward from Asia.

Part of the Silk Road still exists, in the form of a paved highway connecting Pakistan and the Uygur Autonomous Region of Xinjiang, China. The old road has been the impetus behind a United Nations plan for a trans-Asian highway, and a railway counterpart of the road has been proposed by the UN Economic and Social Commission for Asia and the Pacific (UNESCAP).

The main route of the Silk Road traveled through China along the Gansu corridor, then through the Tarima basin, and the highlands of the Pamir and Tianshan ranges, into Central Asia, Afghanistan, Iran, the Eastern shores of the Mediterranean Sea, and still further along to the trading centers of the Near East, Countries of the Silk Road, and Europe.

The Great Silk Road first operated as a route between China and the capital of the Roman Empire in the 2nd century BC. It was approximately 7000 kilometers long. The most valuable commodity imported from China was silk, which is an obvious explanation why this entire transcontinental trade route was named The Silk Road.

The Great Silk Road is, in fact, a network of routes which played a highly significant role in the lives of many people in Eurasia. It was an important artery in the Ancient and Middle Ages, a source of merchandise and information, and the starting point of many conflicts and wars. Along this route sprang into existence, and fell into decline, many nations and cultures, great powers, trade centers, and capitals of many of the former empires of the world. Trade centers and capitals of these empires appeared, flourished and gained fame, and then decayed and declined.

The Great Silk Road is one of the most significant achievements in the history of world civilization. The widespread network of caravan routes crossed Europe and Asia from China to the Mediterranean coast and in ancient times served as an important means of business relations and cultural exchange between East and West. The longest part of the Silk Road lies across the territory of Central Asia and Kazakhstan.

The ancient Silk Road map Caravans laden with silk from China, spices and precious stones from India, silver goods from Iran, Byzantine clothes, Turkic slaves, Afrosiabian ceramics, and many other goods, moved through the Kara-Kum and Kyzyl-Kum deserts, the boundless steppes of Sary-Arka; passed over the ridges of the Pamirs and Tian-Shan , Altai and Karatau Mountains; and crossed the rivers Murgab, Amu Darya and Syr Darya.

The first, the Southern branch, ran from Termez via Samarkand to Dushanbe's present location, along a tributary of the Kyzyl-Su up to Alai and exited in the area of modern Irkishtam, where it switched direction towards Kashgar.

The second, the Fergana branch, led from Samarkand via Hodjent to Isfara, Kokand and Osh.

The third, Northern branch came from Zamin Rabat to Benkent (Tashkent) , Isfidjab (Chimkent), Taraz (Jambyl), Nuzket (Kara-Balta), and Balasugun (Burana). From there, caravans traveled along the Boom Canyon to reach the Issyk-Kul area and further to China across the San-Tash range.

The caravan traffic proceeded at a slow pace. A good day's journey covered 8 farsahs (50 km), a not so good one 4 farsahs (25 km). The composition of the caravan trains varied. There are numerous records of some huge trains containing up to 10,000 beasts of burden. All along the route, caravan-sarais (meeting places) appeared at regular intervals. Torrential streams were tamed with bridges. There was little caravan traffic from China to the Mediterranean. Because the international route opened up access to new places, settled crop production began, alongside nomadic livestock breeding.

The pioneer of the Great Silk road as considered by historians was Chzan Tsan, a Chinese diplomat who lived in the 1st century B.C. The fact that Central Asia had been conducting trade in the Tian-Shan is verified by the large amount of Chinese coins, bronze looking glasses, silk remnants, and fragments of Chinese pottery which have been found by archeologists. Thanks to China, silkworm breeding and paper manufacturing began developing in Central Asia, whereas it was due to Central Asia that China took up cultivation of grapes, alfalfa, onions, cotton, pomegranates, walnuts, fig trees and cucumbers.

A modest commercial traveler called Franchesco Pegolotti, of Bardi's firm in Florence, came home to Italy in 1355 after eight years of traveling. He had covered thousands of Chinese leas, Arab farsahs and European miles of the Great Silk Road. He became the author of a book that was titled "Trade practice, or a treatise on land division, trade measures, and other things the knowledge of which is necessary for merchants of all countries".

One irony is that the ancient path of merchants of the East and the West got its name in the 19th century. The name was proposed by Ferdinand von Richthofen, the author of classical works on the physical geography of China and Asia's topography. Thus, following his example, this name is recognized all over the world. Warmly welcomed by the world public is the decision of UNESCO on the realization of the international program "The Great Silk Road" - a route of dialogue, mutual understanding and rapprochement of cultures. The Great Silk Road, like the Phoenix bird, is beginning its revival.

The New Silk Road is also called the Belt and Road Initiative. It links countries in Europe, Asia, and Africa together. The plan was initiated by China. The New Silk Road focuses on investment for railway, highway and port construction.

-- The legacy of the Silk Road

Today, many historic buildings and monuments still stand, marking the passage of the Silk Roads through caravanserais, ports and cities. However, the long-standing and ongoing legacy of this remarkable network is reflected in the many distinct but interconnected cultures, languages, customs and religions that have developed over millennia along these routes.  The passage of merchants and travellers of many different nationalities resulted not only in commercial exchange but in a continuous and widespread process of cultural interaction. As such, from their early, exploratory origins, the Silk Roads developed to become a driving force in the formation of diverse societies across Eurasia and far beyond.

-- Spirit of the Silk Road

The ancient Silk Road was a trade route that spanned thousands of miles. More than this, it had been a platform for people-to-people and cultural exchanges, where ethnic, racial, religious and cultural convergence took place down the centuries. For millennia, interaction along this route has shaped the Silk Road spirit, which is embodied in peace and cooperation, openness and inclusiveness, mutual learning and mutual benefit. Such an understanding also informs one of the fundamental principles for international interaction today.

Balances of RMB deposits in Yangtze River Delta up to RMB50.51 trln by end May