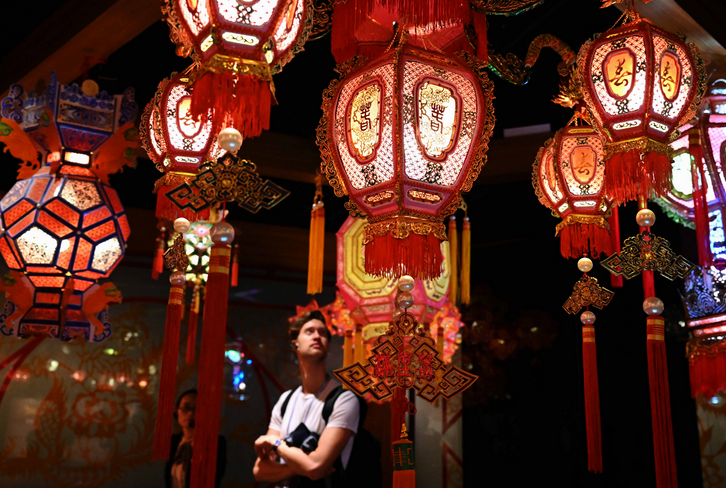 Starting from Quanzhou Fujian Province, the Maritime Silk Road was the earliest voyage route that was formed in the Qin and Han dynasties, developed from the Three Kingdoms Period to the Sui Dynasty, flourished in the Tang and Song dynasties, and fell into decline in the Ming and Qing dynasties. 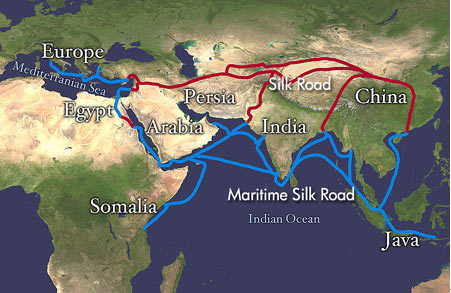 The Maritime Silk Road, like its overland counterpart, had its origins during the Han Dynasty (202 BC-220 AD). Although vast seas separate the four corners of the Earth, with advances in shipbuilding and navigational technologies, maritime transport came to provide unprecedented access to the most distant destinations.

It is known that the bulk of the raw and processed silk transported along the overland Silk Road during the Han Dynasty was produced primarily along China's southern coast and in the coastal Wu, Wei, Qi, and Lu regions (present-day Shandong Province). Since ancient times, these areas have been thriving centers of shipbuilding as well as silk production. They were thus able to supply both commodities for export and the means to transport them across the sea. It was this combination that provided the social and material conditions necessary for the development of maritime trade during the Han Dynasty.

The maritime routes opened by Emperor Han Wudi (reigned 140-87 BC) provided access to the Roman Empire via India, marking the first oceanic route as well as the earliest maritime trading route in the world. This enabled China to actively seek out overseas markets and establish foreign trade relations, and laid the foundation for the development of the Maritime Silk Road.

Han Shu Record (also known as The History of the Han Dynasty) kept the first complete vivid record on China's boats sailing into the Indian Ocean from the South Sea via the Malacca Strait in Southeast Asian waters. Han ships would leave from Xuwen in South China's Guangdong Province, or Hepu in South China's Guangxi Zhuang Autonomous Region, and via the South Sea, would arrive in India and Sri Lanka -- a transfer station, where pearls, colored glazes, and other exotic things could be bought. Chinese silk was transported to Rome hereafter. Such was the Maritime Silk Road.

In his book Nature History, Gaius Plinius Secundus, a knowledgeable scientist in ancient Rome, recorded, "four sailors from (today's Sri Lanka) left for Rome (during the Caesar Era). According to one of the sailors named Rutgers, both Rome and Sri Lanka had direct trade relations with China."

In 166 of the Han Dynasty, the Roman Emperor sent envoys to China, presenting various such gifts as ivory and hawksbill turtles to the imperial royal court, which marked the earliest friendly relations between China and European countries. A direct route from the East to the West was therefore opened up.

During the Tang Dynasty (618-907 AD), Chinese ships set sail from Guangzhou, bound across the South China Sea, thus pioneering the most important routes of the maritime Silk Road. In addition to transporting silk, the South China Sea routes stimulated both material and cultural exchange. Countries throughout Southeast Asia, South Asia, West Asia, and even Europe dispatched emissaries to China via the new maritime routes to establish diplomatic relations, purchase silk, and engage of trade of all sorts. Silk, as the principal maritime trade commodity, flowed in a steady stream from China to other countries.

Profits from the maritime trade were one of the Chinese government's major sources of revenue during this time. The Tang, Song (960-1279), and Yuan (1279-1368) Dynasties all appointed special Commissions of Maritime Affairs at coastal cities including Guangzhou (Canton), Mingzhou (present-day Ningbo), and Quanzhou. These offices were responsible for overseeing maritime trade and providing logistic support and preferential treatment for foreign merchants in China. The maritime Silk Road thus became a conduit for promoting friendly relations and linking East and West. 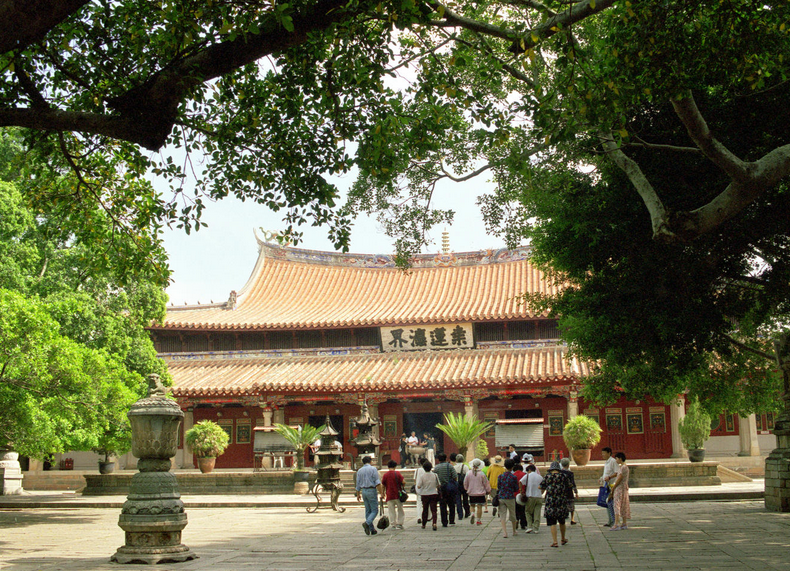 The photo shows a grand Hall, the biggest building in the Kaiyuan Temple in Quanzhou, a city in southeast China’s Fujian Province. (Xinhua/Zhang Shenggui)

Kaiyuan Temple in Quanzhou, the starting place of Maritime Silk Road. The East China Sea Route enjoys a long history of about 3,000 years. It was during the Zhou Dynasty that Ji Zi, a court official, was sent on a journey east, setting off from Shangdong Peninsula's Bohai Gulf and navigating his way across the Yellow Sea, which led to the introduction of sericiculture (silkworm farming), filature and silk spinning into Korea.

When Emperor Qin Shi Huang united China, many Chinese fled to Korea and took with them silkworms and breeding technology. This sped up the development of silk spinning in Korea. These new skills and the technologies were subsequently introduced into Japan during the Han Dynasty. Since the Tang Dynasty, the silks produced by Jiangsu and Zhejiang Provinces were directly shipped to Japan. Many Japanese envoys and monks were also able to travel to Chang'an (now Xi'an) along this sea route.

Guangzhou represented the starting-point of the South China Sea Route, which extended across the Indian Ocean and then on to various countries situated around the Persian Gulf. The types goods dispatched for trade consisted mainly of silk, china and tea, while imported merchandise included a variety of spices, flowers and grasses – hence it being commonly referred to as the sea's 'China Road' and the sea's 'Flavor Road' .

The route was first used in the Qin and Han Dynasties, and increased in popularity from the Three Kingdoms Period (220-280) to the Sui Dynasty (581-618). Up until the Tang Dynasty Anshi Rebellions (755-762), this route was viewed as a secondary alternative to the Silk Road, However in the latter half of the eighth century, owing to the scourge of wars in the vast Western Regions, trade volumes along the Maritime Silk Road boomed as those on its overland counterpart steadily declined.

Delicate Silk Technologic advances in shipbuilding and navigation led to the opening of new sea-lanes to the Southeast Asia, Malacca, areas in the Indian Ocean and the Persian Gulf. Guangzhou became the first great harbor in China around the time of the Tang and Song Dynasties, although it was later substituted by Quanzhou in the Yuan Dynasty (1271-1368) as the most important trade port.

The Naval Expedition to the West by Zheng He in the early part of the Ming Dynasty demonstrated the great importance of the Silk Road and was to represent the peak of its popularity. The governments of the Ming and Qing Dynasties issued a ban on maritime trade, contributing to massive decline in its use. As the Opium War broke out in 1840, the Silk Road on the Sea totally disappeared. 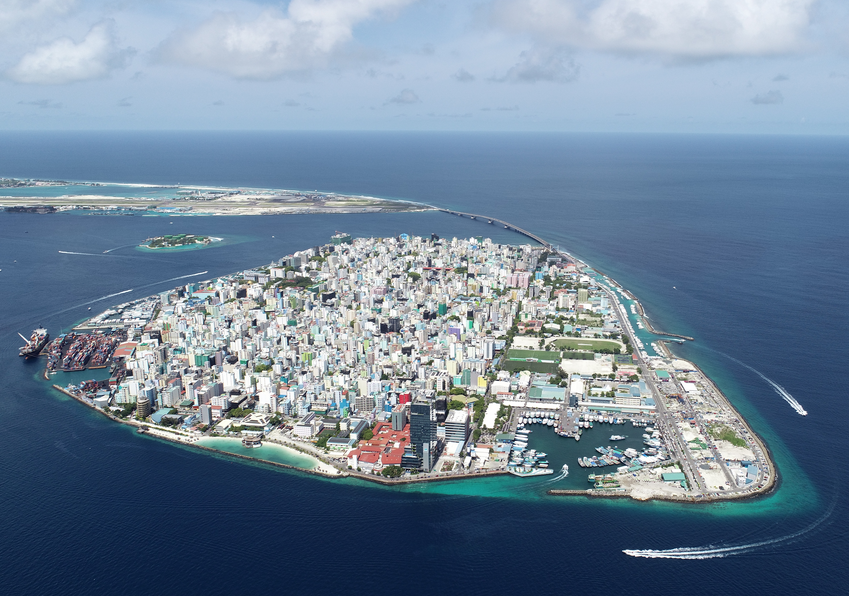 Aerial photo taken on Sept. 1, 2019 shows the panoramic view of Male, capital of Maldives. The 2-km-long China-Maldives Friendship Bridge is an iconic project of the Maldives and China in co-building the 21st Century Maritime Silk Road.(Xinhua/Wang Mingliang)

As early as 2,000 years ago, the Maritime Silk Road started from China's south-east coastal regions, traversing a vast expanse of oceans and seas to countries in Southeast Asia, Africa and Europe.

This trading route that connects the East and the West, had enhanced the exchanges of commodities, people and culture among countries situated on the road.

Such an initiative draws inspiration both from history and from latest developments in the 21st century. The aim is to inject strong impetus in enhancing political mutual trust, deepening economic cooperation, and promoting cultural as well as people-to-people exchanges among relevant countries through joint cooperation, common development and regional integration. All countries along the Maritime Silk Road are welcome to plan, develop and benefit together from the initiative.

Since the initiative was first raised, many countries have actively supported and engaged themselves in the development of the  or the Silk Road Economic Belt (the "Belt and Road" for short) or both.

On Oct. 24, 2014, twenty-first Asian countries signed the Memorandum of Understanding on Establishing the Asian Infrastructure Investment Bank (AIIB) in Beijing, aiming to finance and facilitate infrastructure constructions for Asian countries along the "Belt and Road".

The MOU specifies that the authorized capital of AIIB is 100 billion U.S. dollars and the initial subscribed capital is expected to be around 50 billion dollars. The paid-in ratio will be 20 percent.

At the APEC Summit 2014 held in Beijing in November, 2014, China announced to contribute US$40 billion to set up a Silk Road Fund to provide investment and financial support to carry out infrastructure, resources, industrial and financial cooperation and other projects related to connectivity for countries along the "Belt and Road".

With more support from other countries and wider coverage across the region, the 21st Century Maritime Silk Road has become an initiative not for one country but for all countries who welcome and support the initiative and are working together closely with each other for economic and social advancement as well as for the welfare of their peoples. The 21st Century Maritime Silk Road has always been and will still be open to all countries along the road.

3.
China's central bank to strengthen support for real economy in 2022