Abstract : Looking back on the timeline, it's hard to neglect the role of the Silk Road, which was widely considered as the link connecting China and the west for the first time, as well as the inspiration for today's Belt and Road Initiative.

It seems to be in the nature of human beings to move from one place to another, to trade with their neighbors for goods, skills, and ideas. That's where modern commerce and trade evolved from, and also what today's concept of globalization is based on.

Looking back into history, it's hard to neglect the role of the network of communication routes and trade paths crisscrossing the Eurasian region, known as the Silk Road, which was widely considered as the link connecting China and the west for the first time, as well as the inspiration for today's Belt and Road Initiative.

Very much mirrored in the strategy which was proposed in 2013, the legacy of the ancient trade route once again displays its importance and dynamism in terms of economic cooperation and cultural communication. With Belt and Road Initiative, a past glory for China and the rest of the world will ultimately be re-stored in the 21st century.

-- From when East met West to Marco Polo's pioneering voyage

To fully understand the significance of the Belt and Road Initiative (BRI) today, you need to know about its glorious past as the legendary Silk Road, which dated back to the Han dynasty (206 BC – 220 AD). The Silk Road was an ancient network of interconnected trade routes stretching some 6,000 kilometers from Eu-rope through the Middle East and Central Asia to the Far East. The overland, intercontinental Silk Road divided into northern and southern routes bypassing the Taklamakan Desert and Lop Nur in today's Xinjiang Uygur Autonomous Re-gion.

More than 700 years ago, the Italian explorer Marco Polo took four years to travel along the route through present day Iraq, Iran, and Turkmenistan to ancient China, and documented his voyage, which recorded a culture completely unknown to Europe at that time and did much to kick start the Western age of exploration.

-- History of the Ancient Silk Road

This route was opened up by Zhang Qian in the Western Han Dynasty and the routes were gradually formed throughout the Han Dynasty. This trade route spent its childhood and gradually grew up in this dynasty. With the establishment of the Tang Dynasty, which saw rapid development of economy and society, this famous trade route reached its most prosperous stage in history. During the reign of Yuan Dynasty, it experienced its last flourishing period.

From 139 BC to 129 BC, Zhang Qian set out on his journey to the Western Regions twice, pioneering the world-famous route. Several successful wars against the Huns were commanded by Wei Qing and Huo Qubing (famous generals in Han Dynasty), which removed obstacles along this trade route. The Great Wall was also built in the west to protect the safety of the trade route. In 60 BC, Han Dynasty established the Protectorate of the Western Regions in Wulei (near now Luntai) to supervise this northwest area, which greatly enhanced the trade along this time-honored route.

With the establishment of the Tang Dynasty and great prosperity during this time, the road rose to its most flourishing period in history. Before the Anshi Rebellion (755–762) in the Tang Dynasty, this world-famous road experienced its "Golden Age" of development.

Along with the growth of the Mongolian Empire and the establishment of the Yuan Dynasty, the route regained its vigor and became prosperous once again. It enjoyed the last glorious era during this period.

In 1271, the great Mongolian ruler Kublai Khan established a powerful Mongol Empire – Yuan Dynasty (1271-1368) at Dadu (the present Beijing). The territory of the giant empire was the largest one in Chinese history, which stretched as far as Mongolia and Siberia in the north, South China Sea in the south, Tibet and Yunnan in the Southwest, Stanovoi Range (Outer Khingan) and Okhotsk in northeast, Xinjiang and Central Asia in the northwest. Even West Asia and Russia were under the control of this empire.

The Mongol Empire destroyed a great number of toll-gates and corruption of the Silk Road; therefore passing through the historic trade route became more convenient, easier and safer than ever before. The Mongolian emperors welcomed the travelers of the West with open arms, and appointed some foreigners high positions, for example, Kublai Khan gave Marco Polo a hospitable welcome and appointed him a high post in his court. At that time, the Mongolian emperor issued a special VIP passport known as "Golden Tablet” which entitled holders to receive food, horses and guides throughout the Khan’s dominion. The holders were able to travel freely and carried out trade between East and the West directly in the realm of the Mongol Empire.

Although maritime transport had an influence on the route, many westerners, Chinese envoys and caravans traveled along this ancient trade route. However, the historically important route could not contend with expansion in the field of navigation which assisted its demise. 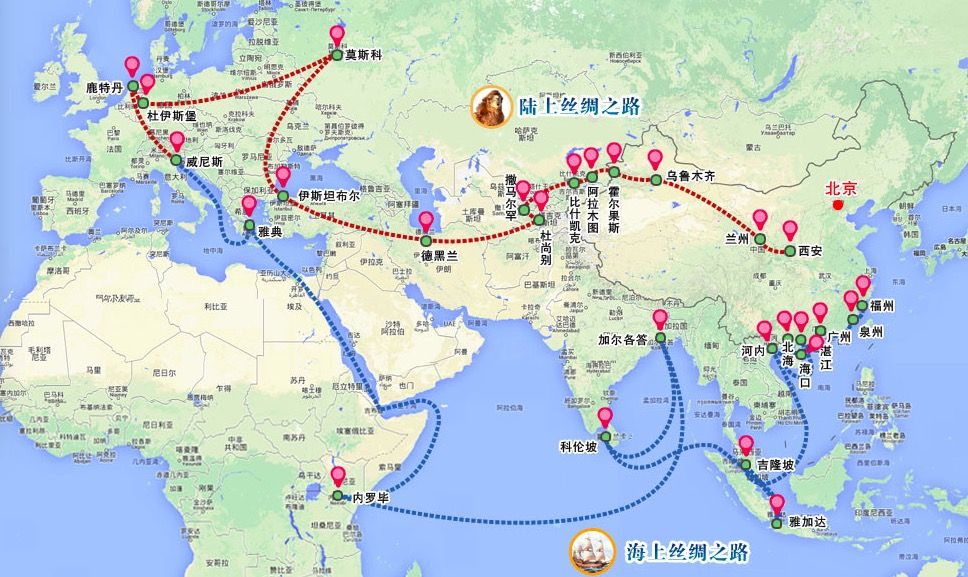 -- The Significance of the Silk Road

The silk road is a symbol of the Chinese nation's going to the world, and it is related to the rise and fall of the Chinese nation. In ancient times, under the circumstance that the communication between east and west countries was so inconvenient, the Silk Road created a platform helping the exchange of Chinese and western countries.

The opening of the silk road effectively promoted the economic and cultural exchanges between the east and the west, especially played a positive role in promoting the prosperity of the Han dynasty. The silk road, which is still an important path for Chinese and western exchanges, completed its mission at the time of industrialization. It has been replaced by the 10900-kilometer new Eurasian Land Bridge, but it still has new value to be developed.

The silk road was a famous land trade route that traversed Asia and connected Eurasia in ancient times. It expanded China's foreign economic trade and made the world know China. At the same time, it promoted the trade between China and other countries in the world, and achieved mutual benefit and reciprocity, laying a good foundation for future cooperation. In addition, silk also brought about the progress of the world.

Trading activities along the Silk Road over many centuries facilitated the transmission not just of goods but also ideas and culture, notably in the area of religions, Buddhism and art.

The spread of religions and cultural traditions along the Silk Roads also led to syncretism. One example was the encounter with the Chinese and Xiongnu nomads. The Xiongnu adopted Chinese agricultural techniques, dress style, and lifestyle, while the Chinese adopted Xiongnu’s military techniques, some dress style, music, and dance.

The Silk Road enormously promoted the culture exchanges between China and western countries. Also, it helped established the great influence of Chinese culture and Chinese history in the world, especially the Han Dynasty culture.

The Silk Road Economic Belt focuses on bringing together China, Central Asia, Russia and Europe (the Baltic); linking China with the Persian Gulf and the Mediterranean Sea through Central Asia and the Indian Ocean. The 21st Century Maritime Silk Road is designed to go from China's coast to Europe through the South China Sea and the Indian Ocean in one route, and from China's coast through the South China Sea to the South Pacific in the other. Following are the major events in the development of China’s Belt and Road Initiative so far.

-- In the autumn of 2013, respectively in Kazakhstan and Indonesia, the building of the Silk Road Economic Belt and the 21st Century Maritime Silk Road was proposed.

-- The initiative's top-level design has been completed, with basic structures set up. Important resolutions passed by the UN General Assembly and Security Council contain reference to it.

-- As of July 2018, more than 100 countries and international organizations had signed Belt and Road cooperation documents with China, extending the initiative's scope from the Eurasian continent to Africa, Latin America and the Caribbean, and the South Pacific region.

-- On Nov. 8, 2014, China announced contributing 40 billion U.S. dollars to set up a Silk Road Fund to support the Belt and Road projects.

-- On May 14-15, 2017, the first-ever Belt and Road Forum for International Cooperation was held in Beijing, attended by state and government leaders of 29 countries. The more than 1,600 participants came from over 140 countries and 80 international organizations.

-- On Oct. 24, 2017, pursuing the Belt and Road Initiative was written into the Constitution of the Communist Party of China.

-- About 95 percent of the 279 items on the outcome list of the Belt and Road Forum for International Cooperation had been accomplished as of July 2018. The 14 others are being worked on.

-- Under the initiative, China has set up 81 education institutions and projects as well as 35 cultural centers in countries along the Belt and Road. In the first half of 2018, China spent over 270 million yuan (around 39.3 million U.S. dollars) on the Silk Road scholarships.

Jiangsu, smart intersection of the Belt and Road

4.
China to bring coal prices back to appropriate range

Looking back on the timeline, it's hard to neglect the role of the Silk Road, which was widely considered as the link connecting China and the west for the first time, as well as the inspiration for today's Belt and Road Initiative.