Abstract : With more support from other countries and wider coverage across the region, the 21st Century Maritime Silk Road has become an initiative for all countries.

The oceans comprise the largest ecosystem on earth, contributing valuable assets for human survival and a common arena for sustainable development. As globalization and regional economic integration progress, oceans have become a foundation and bridge for market and technological cooperation and for information sharing. Developing the blue economy has become an international consensus, ushering in a new era of increased focus and dependence upon maritime cooperation and development. As the saying goes, "Alone, we go faster; together, we go further." Conforming with the prevailing trend of development, openness and cooperation, strengthening maritime cooperation contributes to closer links between world economies, deeper mutually beneficial cooperation, and broader space for development. Enhancing maritime cooperation also enables various countries to jointly tackle challenges and crises, thus promoting regional peace and stability.

China advocates the Silk Road Spirit - "peace and cooperation, openness and inclusiveness, mutual learning and mutual benefit", and exerts efforts to implement the United Nations 2030 Agenda for Sustainable Development in the field of coasts and oceans. China is willing to work closely with countries along the Road, engage in all-dimensional and broad-scoped maritime cooperation and build open and inclusive cooperation platforms, and establish a constructive and pragmatic Blue Partnership to forge a "blue engine" for sustainable development.

As early as 2,000 years ago, the Maritime Silk Road started from China's south-east coastal regions, traversing a vast expanse of oceans and seas to countries in Southeast Asia, Africa and Europe.

This trading route that connects the East and the West, had enhanced the exchanges of commodities, people and culture among countries situated on the road.

About the B&R Initiative

Such an initiative draws inspiration both from history and from latest developments in the 21st century. The aim is to inject strong impetus in enhancing political mutual trust, deepening economic cooperation, and promoting cultural as well as people-to-people exchanges among relevant countries through joint cooperation, common development and regional integration. All countries along the Maritime Silk Road are welcome to plan, develop and benefit together from the initiative.

Since the initiative was first raised, many countries have actively supported and engaged themselves in the development of the 21st Century Maritime Silk Road or the Silk Road Economic Belt (the "Belt and Road" for short) or both.

Leveraging the ocean as the basis for enhancing common welfare, with the theme of sharing a blue space and developing the blue economy, China encourages countries along the Road to align their strategies, further all-around and pragmatic cooperation, and to jointly build unobstructed, safe and efficient maritime transport channels. Together we will build platforms for maritime cooperation and develop the Blue Partnership, pursuing a path of harmony between man and the ocean, characterized by green development, ocean-based prosperity, maritime security, innovative growth and collaborative governance.

In line with the priorities of the 21st Century Maritime Silk Road, China will deepen ocean cooperation by fostering closer ties with countries along the Road, supported by the coastal economic belt in China. Ocean cooperation will focus on building the China-Indian Ocean-Africa- Mediterranean Sea Blue Economic Passage, by linking the China-Indochina Peninsula Economic Corridor, running westward from the South China Sea to the Indian Ocean, and connecting the China-Pakistan Economic Corridor (CPEC) and the Bangladesh-China-India-Myanmar Economic Corridor (BCIM-EC). Efforts will also be made to jointly build the blue economic passage of China-Oceania-South Pacific, travelling southward from the South China Sea into the Pacific Ocean. Another blue economic passage is also envisioned leading up to Europe via the Arctic Ocean.

Progress has been achieved in implementing a series of programs and projects, including the Malaysia Malacca Seaside Industrial Park, the Pakistan Gwadar Port, the port+industrial park+city mode of integrated development of the Kyaukpyu port in Myanmar, the Colombo Port City and the Phase II Hambantota Port Project in Sri Lanka,the railway linking Ethiopia and Djibouti, the railway between Mombasa and Nairobi in Kenya, and the Piraeus port in Greece. China is collaborating with the Netherlands in developing offshore wind power generation and with Indonesia, Kazakhstan and Iranin implementing seawater desalination projects. The connectivity of submarine communication has been remarkably enhanced and the Asia-Pacific Gateway (APG) submarine optical fiber cable is officially up and running. The industrial parks in China's Qinzhou and Malaysia's Kuantan, the Sihanoukville Special Economic Zone in Cambodia and the Suez Economic and Trade Cooperative Zone in Egypt, are currently under construction, and have achieved remarkable progress.

With more support from other countries and wider coverage across the region, the 21st Century Maritime Silk Road has become an initiative not for one country but for all countries who welcome and support the initiative and are working together closely with each other for economic and social advancement as well as for the welfare of their peoples. The 21st Century Maritime Silk Road has always been and will still be open to all countries along the road.

The 21st Century Maritime Silk Road and the Silkroad Economic Belt together are known as the Belt and Road Initiave. 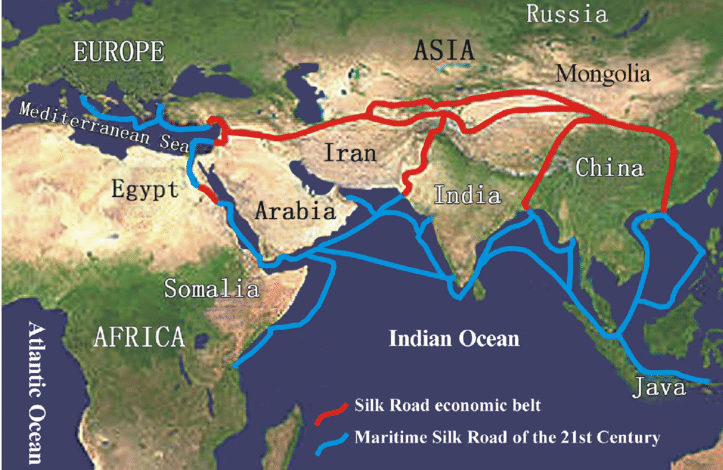 China imports avocados from the Philippines

China Re Group vows to expand international business in 2020

EssilorLuxottica issues warning on revenues due to COVID-19

1.
Economic Watch: Discover Chinese consumers in COVID-19-ravaged 2020 and beyond

1.
Xinhua Bizwire, biz info wire service for communicating your brand story in China and beyond

4.
Across China: Starbucks cultivates growing taste of coffee in China

With more support from other countries and wider coverage across the region, the 21st Century Maritime Silk Road has become an initiative for all countries.